×
Go to content
×
Loadcells Singlepoint Shearbeam Bending Beam Compression Pancake S Type Other
A full range of competitively priced:
Singlepoint, shearbeam, bending beam, compression S Type and pancake loadcells are available, please give us a call to discuss your requirements.
Whether its a budget non trade, top of the line 15000e stainless steel with mounting, or compression cell for your weighbridge you are looking for we are likely to have the solution.
Sales@scaletec.co.nz
A load cell – sometimes referred to as a ‘force’, ‘weigh’ or ‘weight’ cell – is a transducer that converts the load acting on it into a measurable (analogue or digital) output.  The output is proportional to the force or load applied.
The conversion is achieved by the physical deformation of strain gauges, which are bonded onto the load cell structure. The strain gauges are connected into a Wheatstone Bridge circuit with four strain gauges (full bridge), two gauges (half bridge) or one gauge (quarter bridge).  With half and quarter bridges, the bridge is completed using precision monitors.
Additional bondable resistors are configured within the bridge circuit to compensate for the effects of temperature on the zero or no-load signal and the sensitivity (output due to applied load, plus a further resistor to enable the bridge to be nulled at no load).
The completed Wheatstone Bridge requires a stable DC supply to excite the circuit.  This is usually 5Vdc or 10Vdc, but can be any value from 1Vdc up to 18Vdc. 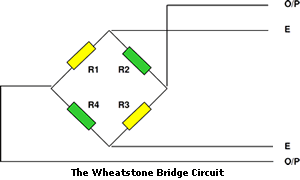 As stress is applied to the bonded strain gauges, a resistive change takes place which unbalances the Wheatstone Bridge.  This provides an output signal that is linearly proportional to the stress value.   The value of this signal, which is also proportional to the excitation voltage, is typically a few millivolts.
These low level millivolts signals are compatible with a vast range of bespoke strain gauge instrumentation.  These instruments include digital displays, analogue and digital amplifiers.  Typical analogue amplifiers will generate a higher level voltage (0-5Vdc, 0-10Vdc) or current (0-20mA, 4-20mA) for onward processing.
Digital amplifiers typically provide an RS232, RS422 or RS485 output using either the common ASCII protocol or one of a host of more specialised, industry-specific protocols that have been developed such as CANbus or Modbus.  Both the analogue and digital instrumentation have been reduced in size (miniaturised) sufficiently to enable the item to be fitted within the body of a load cell or force sensor.
Load cell designs are either distinguished by the type of output signal they generate (pneumatic, hydraulic or electrical) or by the method in which they detect the load or weight (bending, shear, compression, tension, etc).
Load Cell Operating Principle
Strain gauge load cells convert the load acting on them into electrical signals.  The gauges themselves are bonded onto a beam or structural member that deforms when force is applied.  In most cases, four strain gauges are used to obtain maximum sensitivity and temperature compensation.  Two of the gauges are usually in tension, and two in compression, and are wired with compensation adjustments.   When a load is applied, the strain changes the electrical resistance of the gauges in proportion to the load.  Other load cells are becoming less popular as strain gauge versions continue to increase their accuracy whilst reducing unit costs.
The early load cell designs simply use a strain gauge to measure the direct stress, which is introduced into a metal element when it is subjected to a tensile or compressive force.  A bending beam type design uses strain gauges to monitor the stress in the sensing element when subjected to a bending force.  More recently, the measurement of shear stress has been adopted as a more efficient method of load determination, as this method is less dependent on the direction in which the force is applied to the load cell.
Potential applications for load cells includes the weighing of silos, vessels, crane safety monitoring, weighing of tanks, vessels and conveyors, lifting, fatigue testing, R&D testing, quality control, industrial weighing scales, weigh platforms, Weighbridges, Underhook scales, tensile testing machines and dynamometers.  The marine sector also uses waterproof, submersible or sea water load cells.
Platform and Single Point Load Cells (Dual Beam)

This type of load cell is used in commercial and industrial weighing systems.
Single point load cells provide accurate readings regardless of the position of the load on the platform.
Shear Beam Load Cells

In this design, in order to maximise the shear effect, the strain gauges are bonded to a reduced part of the cross-section of the beam.  The strain gauges are bonded at 45 degrees on either side of the beam in order to measure the shear strains.  Used for medium-to-large capacities, the load cell has good linearity and is not as susceptible to extraneous loading, in particular to side loads.
Bending Beam Load Cells
Bending beam load cells incorporate strain gauges that are bonded on the flat upper and lower sections of the load cell at points of maximum strain.  These types of load cells are often used in multiple load cell applications, including tank or vessel weighing and for industrial process control systems.  The load cells have a low profile design for easy integration into restricted spaces.  These types of load cells are often used for low capacity applications and perform with excellent linearity.  One drawback of this design is that it must be loaded correctly to obtain consistent results.
Compression Load Cells

Compression/Canister load cells often have an integral button design.  These are ideal for mounting where space is restricted and they offer excellent long-term stability.
This type of load cells are used for single and multiple weighing applications.   Many designs incorporate an all-stainless steel construction and are hermetically sealed to withstand frequent wash down or damp/wet conditions.
Pancake
The popular pancake type load cell is configured to operate in shear, offering a very low profile in a design that is easily environmentally sealed and is largely insensitive to off-axis loads. 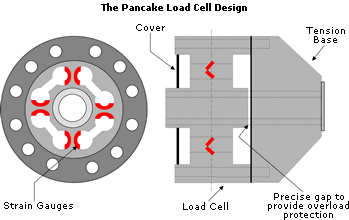 Products specific to this group include ‘S’ and ‘Z’ beams, lift links, canister tension cells, tensile links, submersible canister types, non-contact tension measurement, clamp-on and toggle models. S-Beam or Z-Beam Load Cells
Derived from their shape, S-beam and Z-beam load cells are usually relatively simple designs in which the structure is shaped as an 'S' or 'Z', with strain gauges bonded to the central sensing area in the form of a Wheatstone bridge.  S-Beam load cells can provide an output if under tension or compression and provide superior side-load rejection.  Applications include tank level, hoppers and truck scales.
Load Measuring Pins
Products specific to this group include load pins, force pins, custom pins, shackle pins, sheave pins, clevis pins.  Load pins are often a convenient way of measuring force by replacing an existing pin with a strain gauged version that is able to provide an electrical signal proportional to the applied force.
Link Load Cells
Normally, this type of tension link is used in lifting applications on cranes and winches.  The cells can be self-indicating links, remote display by wire links or remote display by telemetry links.  They are also useful for measuring forces in vertical or horizontal tension frames and marine mooring applications.
Zemic L6D
Singlepoint Loadcell
3, 5,15 and 30kg

for use in multi loadcell weighbridges