Silage/Maize weighing system
You may have seen our recent editorial and adverts in the Rural Contractor magazine for our system which is tried and tested. This has led to increased sales of our silage/maize indicators and software to the Rural Contracting industry, enabling more and more contractors to increase efficiency and save time.
The system is designed around their needs and the software can be adapted to each Contractors particular requirements, which often includes less input from drivers, the ability to amend jobs, dry percentages and truck details whilst on site.
Of major benefit is to be able to then download this information onto a USB stick and to populate this information into a spreadsheet, often saving many hours back at the office processing this information at the end of what can be a very long day!! 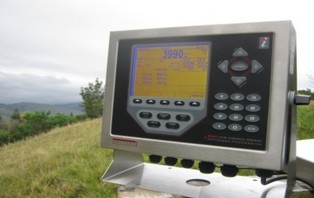 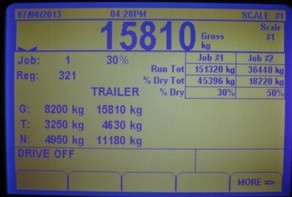 I have included below some of the comments from satisfied customers who have been benefiting from this system.

Te Awamutu-based silage contractors Holmes and Chittick operates two Scaletec systems on portable weighbridges for weighing grass and maize silage.
Paula Holmes says the Scaletec system is vastly superior to their previous weighing system.
“There’s no comparison. It is so far ahead it is not funny,” she says. “The software hasn’t had a single problem in the three years we have been using it.
“The system is fully automated, so we don’t have a person sitting at the scales recording anything. Our previous system was fully automated too but it had such poor software that it was always breaking down. The reliability of Scaletec's Silage / Maize portable weighbridge system is so much better and it is quicker and better quality. I think it is a top-class, exceptionally good set up,” Paula says.

Mike Kettle, of Silage Hawkes Bay Limited, says the Scaletec system has simplified things for his truck drivers considerably.
“It’s good because you’re able to change it if you don’t like the programme. Scaletec will come back and reword it, which is a major plus for us,” he says.
“We got them to write it so there is not so much information on the screen for the truckies. We had a similar system before but this one gives you more information and you can chop and change as you go. It’s quite simple. It also saves time because you can download it onto a memory stick and just take it home at the end of the day.”
www.Hayandsilage.co.nz